Pride in the Month of June

In English translations of the New Testament, Romans is the first of Paul’s letters to appear. Scholars believe, however, that Paul’s letter to the Romans was one of the last he wrote, late in his life, to the church in the city where he would ultimately die. It has been my habit for many years to read through the Bible, and around June I always find myself reading Romans. It is one of Paul’s most difficult letters to read, but also one of his most gracious.

Sixteen years ago I was baptized into the Christian church. It is the custom of the branch of Christianity in which I was raised to baptize people when they are supposed to be old enough to choose faith for themselves. In those sixteen years I have veered from one extreme to another in my faith or lack thereof, but I have always managed to be reading the Bible. It has been the literary constant to my variable religion.

I have tried, for at least that long, always to be honest about Christianity. And for the last twelve years, I have tried also to be honest about being gay. In the gay and lesbian community, we call such honesty “coming out.” It is a process that never really ends, and it can be just as traumatic with the person who has never heard it before as it was the first time.

I came out in the early part of 1991, to some people I knew, then in public and in print. And it was a heady time to do so. “Come out in spring. Everything else does.” I decided to be open about something I had known for a long while because I saw people around me, openly gay students at my university, being harassed with death threats and attacks. People of all sexual identities rallied around these students and demanded that the administration do something to respond. Before I graduated three years later, I would see that university grant equal benefits to same-sex partners. At the time, however, coming out was an act of some defiance.

We wore pink triangles, the symbol the Nazis had used to identify homosexuals in the concentration camps. I didn’t know, when I was eighteen, that a pink triangle stood in Amsterdam as the first memorial in the world to gay victims of the Nazis. I knew it as the symbol of ACT UP, the AIDS Coalition To Unleash Power, one of the groups active in the early 1990s. Gay people were angry then because so many men, young men, in our community were dying, and few other people seemed to care because AIDS was a “gay disease.” We know AIDS now as the scourge of heterosexual communities, an epidemic in the developing world. But in those days many people told us that the plague was sent by God on our community of sinners.

I think about these things every June because June marks Pride, commemorating the first modern demonstration of defiance by gay people in public, at Stonewall in New York City. Stonewall happened in 1969, the year of the moon landing and Woodstock. The past ten years have been tremendously exciting and frustrating, for the gay and lesbian community and for me personally. We have gone from being “everywhere spoken against,” like the early Christian church, to gaining some measure of equality, in law and/or in fact. I have seen one community I am a part of, the gay community, lose so many bright members to disaster, and I have heard HIV statuses both negative and positive, in waiting rooms and over phone lines. I have seen another community I am a part of, the church, bitterly divided over “gay issues,” with clergy and laity of many communions turning their backs on one another and walking out because they could not stand him or her or them. I have lost some friends and gained others.

I have walked in a Pride parade in London, protesting for the right to live in the same country as my British partner (something we only achieved in Canada, after nearly eight years). I have celebrated Pride in Oxford and Chicago. I have walked with Integrity, an Anglican group, at Pride in Knoxville, Tennessee, where the only Integrity members who dared to walk beside me were either straight (God bless them) or self-employed, and so had less to fear. And this year, I walked with the Church of the Holy Trinity in Toronto, in front of close to a million people, only one of whom overtly challenged us:

“Stop sinning,” his poster said, “or burn forever in the lake of fire.”

Ten years “out,” and still my heart beats faster when I see this man--because there are many of him. A decade of telling people, and yet so many still don’t know, or I don’t know they know. All those years and immigrating to another country and living in its largest and most diverse city, and still there’s only one weekend of the year when I feel safe walking hand-in-hand with the woman I love, a public display that has earned women death in Appalachia, where I’m from. I was in high school when two lesbians were shot on the Appalachian Trail by a man who couldn’t stand to share the wide world with their sexuality. I didn’t learn this until I read it in a poem by Adrienne Rich, whom I had the pleasure of meeting in Chicago the year I first came out.

I say I came out ten years ago, but there is so much more to do. There will be so many more moments when I am forced to choose: do I confront this “issue,” or do I take the easy way? Do I tell you whom I choose to spend my life with, or do I mention “someone,” a “friend,” a really good friend--who crossed the world to be with me? When I walk down the street at Pride Toronto with gay and supportive Christians, with Parents and Friends of Lesbians And Gays, with the politicians and the workers, the hedonists and hangers-on--who am I? Am I a lesbian? A Christian? Or just a human being?

For make no mistake about it: There is a choice to be made. To be openly gay, to be “out,” to be proud, is a choice. To confess or deny. To stand with Jesus, who despised the shame, or to despise and shame. Christians, of all people, should be familiar with the need to choose.

On Pride Sunday, before the parade, we had a visitor in church, a woman from Virginia. She looked much like any older woman I might meet in the South, except that she was dressed in rainbow colours, and during the prayers she thanked God for this congregation and for leading her to celebrate with us this morning. After the service I went to talk with her and she explained that her husband was in Toronto for a conference. She was originally from Ohio, and I told her about my connection with the States. When we were getting ready to leave, she said to my lover and me, “I bless you in the name of Jesus.”

I came home from Pride both elated and disturbed. Christians, like gay people, are familiar with proclaiming victory year after year and yet never really seeing it come. My reading for this Sunday was from Paul’s letter to the Romans. I turned to chapter 8 and read:

“What then shall we say to this? If God is for us, who is against us? He who did not spare his own Son but gave him up for us all, will he not also give us all things with him? Who shall bring any charge against God’s elect? It is God who justifies; who is to condemn?

“Who shall separate us from the love of Christ? Shall tribulation, or distress, or persecution, or famine, or nakedness, or peril, or sword?

“No, in all these things we are more than conquerors through him who loved us. For I am sure that neither death, nor life, nor angels, nor principalities, nor things present, nor things to come, nor powers, nor height, nor depth, nor anything else in all creation, will be able to separate us from the love of God in Christ Jesus our Lord.”

I bless you in the name of Jesus. 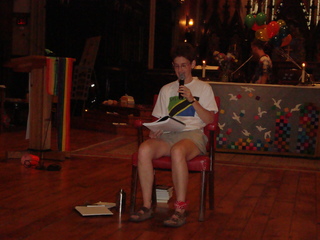 Reading at Church of the Holy Trinity, Toronto, 28 June 2009